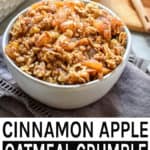 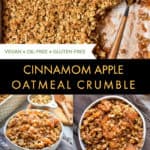 This vegan Apple Crumble is easy and made with plain and simple ingredients. Baked cinnamon-spiced apples covered in a crunchy oatmeal topping that’s perfect for breakfast or dessert.

This Vegan Apple Crumble beats the hell out of some crappy little granola bar pretending to be breakfast. And, it’s much easier to make than an apple pie. Let’s DO IT!

How To Make Vegan Apple Crumble

One of the best things about this Vegan Apple Crumble is the aroma. Your house will smell like Christmas on steroids while it bakes. So, bake up a batch of this wonderful dish and fill your house with the smell of REAL cinnamon apples and maple.

CAUTION: Once you smell this thing baking you’ll start to drool instantly. The aroma is hypnotic.

You WILL LOVE this Vegan Apple Crumble. It’s…

Make It Ahead Of Time

This dish makes a great dessert that takes no time to put together. And, it’s ready by the time your guests arrive. It’s also perfect for a lazy weekend breakfast.

Simply bake the day before, let it cool, and store in the fridge until the next morning. If you want to reheat, place in a 350-degree oven for 10-15 minutes. Easy as pie (see what I did there).

Can I Freeze It?

Yes! You can store this vegan apple crumble for up to 3 months, baked or unbaked, in your freezer. Let it thaw overnight in the fridge. If it hasn’t been baked simply follow the cooking instructions in the recipe card below. And, if it has been baked place it in a warm oven until it’s just hot enough to eat