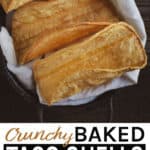 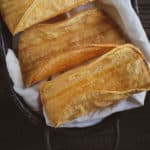 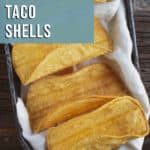 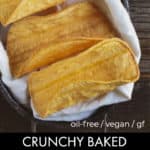 Crunchy baked taco shells that are easy to make, healthy, low-fat and delicious! These things crisp up like a dream with NO OIL and NO DEEP FRYING!

Yeah, that’s right. I said, “CRUNCHY Baked Taco Shells!” These things come out of the oven crisp and delicious. And, they’re cheap and easy as hell to make.

It’s time for you to show your arteries some love and leave those crappy deep fried meat racks on the shelf. That stuff is bush league.

What was that loud BOOM? Shots fired in the taco shell war. GAME…ON!

If you’re like me, you probably felt destined to a life of soft whole-wheat or soft corn tortillas for your healthy tacos. I had no problem ditching the idea of meat tacos. But, I gotta be honest. I grew pretty tired of soft taco shells pretty quick.

So, one day I fired up the oven and draped some tortillas over the oven racks. It was sheer genius. Or, so I thought. That was until I realized this was already a thing. My celebrity was short lived. Still, I felt this information should be available to the general public.

The hardest part about this recipe is not burning yourself. I know…I’ve done it.

Preheat your oven to 350 degrees. Then, once it’s ready, carefully drape the corn tortillas over two spaces on the oven rack. Why 2 spaces? Because it creates a nice little flat bottom so the taco shells will stand on their own. And, that’s awesome because you won’t have to hold the shell while you’re loading it with stuff.

Now, simply let them bake until they’re golden-brownish. Usually around 10-15 minutes. Learn your appliances because you’ll need to feel it out. Because if you take the tortillas out too early, they’ll be chewy. If you take them out too late, you’ll burn them. But, 10-15 minutes seems to be the sweet spot.

Now, all that’s left is to stuff the tacos with my Cauliflower Mushroom Walnut Taco meat and have a party! Oh, but don’t stop there. Go crazy and cover this bad boy with my Cashew Cheese Dip and Tofu Sour Cream. I promise your life will change.

These taco shells are just as good as fried taco shells. In fact, I say they’re better because they don’t crumble like those wimpy ass store bought shells. And, you can buy a whole bag of corn tortillas for just a couple bucks.

I almost feel guilty calling this a recipe. I said almost.

Side note: If you like crunchy things you should try my Crunchy Baked Onion Rings & Healthy Homemade Tortilla Chips. The chips are perfect for dipping into my Vegan Spinach Artichoke Dip. Just sayin’…

So, if you happen to make these Crunchy Baked Taco Shells let me know! Leave a comment below with a STAR rating. And, share a picture by tagging me on Instagram and use the hashtag #shaneandsimple. I want to see your work. Enjoy! 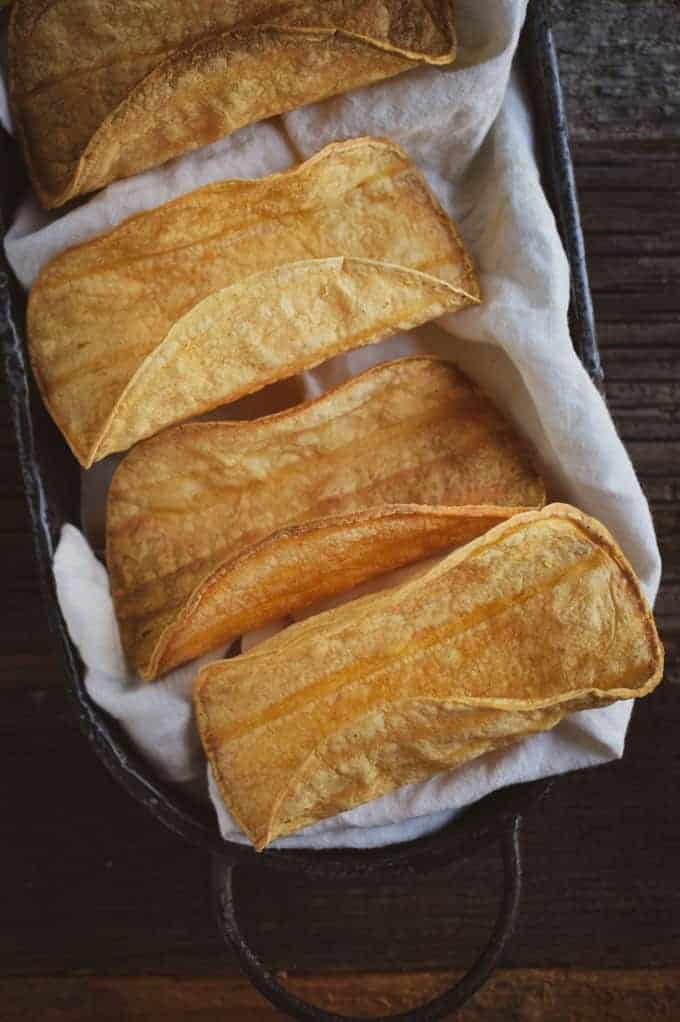