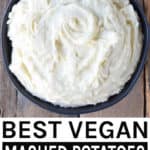 The BEST Vegan Mashed Potatoes recipe! Creamy, smooth, rich, tangy, and healthy. Whip these taters up in no time. So easy to make and absolutely delicious. No milk, butter, or other harmful ingredients. This is one of those recipes that will get made year-round and not just on holidays.

November is right around the corner and you can’t have Thanksgiving without making the best vegan mashed potatoes in the world. Serve up these tasty taters and no one will ever know they’re actually healthy. The taste and texture are amazing!

As an added bonus, it’s the perfect food when all the family is in town for the holidays. They’ll be so busy eating you won’t have to engage in all that meaningless small talk with the weird uncle you’re always trying to avoid. You’re welcome!

VEGAN MASHED POTATOES – Protecting you from all the awkward and irrelevant conversations at even the most dreaded get-togethers.

How Do You Make Vegan Mashed Potatoes

First, peel the potatoes (or not if you prefer to leave the skins on…totally acceptable), and roughly chop into small chunks. And, feel free to use the potato of your choice. I prefer Russet or Yukon Gold Potatoes.

Place the potatoes in a large pot and cover them with water. Bring the water to a boil, reduce the heat to medium-high, and gently boil until the potatoes are tender enough to pierce with a fork. Usually about 12-20 minutes.

You can also use your Instant Pot and steam them. It takes just 13 minutes and you’ve got perfectly steamed potatoes.

When the potatoes have finished cooking, drain the water and add them to the bowl of your KitchenAid Stand Mixer or you can use a handheld mixer. Lightly mash the potatoes with a potato masher. Place whisking attachment onto the mixer, add the cashew sour cream, almond milk or soy milk, and remaining ingredients.

Whisk until your vegan mashed potatoes reach your desired consistency. If you want lumpier potatoes just whip them for a couple of minutes. For creamier, smoother potatoes whip them longer.

Next to my Vitamix, the KitchenAid Stand Mixer is one of those “must haves” I must have. I shudder to think what my kitchen would be without either of them.

If you don’t have a KitchenAid Stand Mixer or handheld mixer you’ll have to kick it old school with a potato masher.

Big deal! Your grandmother did it that way and she never complained. And, I bet her potatoes were pretty darn good!

What Goes With Vegan Mashed Potatoes

You will love these Vegan Mashed Potatoes! They are…

If you make this be sure and leave a comment. Then, take a picture; post it on Instagram; and, tag the photo #shaneandsimple because I want to see your creation. I really do! It’d also be really great if you would SUBSCRIBE to Shane & Simple…it’s free! Really!

The BEST Vegan Mashed Potatoes recipe! Creamy, smooth, rich, tangy, and healthy. Whip these taters up in no time. So easy to make and absolutely delicious. No milk, butter, or other harmful ingredients. This is one of those recipes that will get made year-round and not just on holidays. 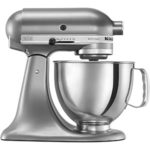 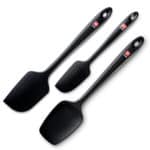 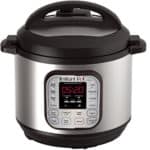 You can leave the Cashew Sour Cream out to reduce the fat and they still taste great. You can also use my Easy Vegan Tofu Sour Cream as well.