The best vegan egg substitutes for healthy vegan baking and cooking. Use these egg replacements for making cakes, muffins, and more.

Following a vegan or whole food, plant-based diet, for the most part, is fairly simple. But, when it comes to baking and desserts things can get a little tricky. And, learning how to cook without using dairy, and eggs can feel a bit daunting.

You can eliminate dairy usually with no problems at all simply by subbing in your favorite plant-based milk of choice. But, the one that seems to frustrate most people is finding a satisfactory replacement for eggs in vegan baking.

In order to help get you started, I have put together this list of vegan egg replacers and some examples of how to use each one. The best thing about most of these options is that most of the ingredients are probably already in your pantry, And, if not, they are easily found at most grocery stores.

The Purpose Of Eggs In Baking

Eggs play a vital role in cooking and baking. The most important, IMO, is binding ingredients together. But, they also provide structure to a recipe, add moisture, and help to give whipped recipes a nice lift.

Fortunately, there are several plant-based and vegan options for replacing eggs so you never have to miss out on any of your favorite recipes or desserts. And, you can make them healthy without sacrificing taste and texture.

What Do You Substitute For Eggs In Vegan Baking?

There are several different options when it comes to replacing eggs in plant-based cooking and baking.

I’ve broken down each vegan egg substitute for the different types of baked goods. And, I’ve also included a list in the recipe card at the bottom of this post.

NOTE: each vegan egg replacement is equivalent to replacing one large egg.

Aquafaba is the liquid or brine found in a can of chickpeas. It’s a great replacement for egg whites and makes awesome meringues.

This is best when used in recipes that specifically call for egg whites as opposed to whole eggs. It’s also an excellent oil replacement for recipes like this oil-free vegan pesto or vegan cornbread recipe.

Apple sauce is fat-free and a great way to replace eggs in baked goods. Use ¼ cup of unsweetened apple sauce to replace one egg. It’s a great binder and perfect for adding moisture to cookies, vegan carrot cake, muffins, and quick breads like this amazing vegan banana bread.

Silken tofu has the consistency of a boiled egg white. So, it’s perfect for adding a creamy texture when used as an egg substitute in recipes like vegan mayo, cheesecakes, ice cream, sour cream, or decadent chocolate mousse.

Flax eggs tend to be the most common in vegan baking and are super easy to make. A flax egg has the consistency and texture of an egg and is a great binding agent. It’s perfect for dense bread, muffins, and veggie burgers. To make one simply combine 1 tablespoon of ground flaxseed with water and let it sit for 5-10 minutes.

However, unlike real eggs, flax eggs provide no lift at all so it’s best to use them where they’re needed for their binding qualities.

Chia Egg Made With Chia Seeds

Chia seeds produce more of a gel-like texture when combined with water. They’re an excellent egg replacement for things like cookies and pancakes. But, one of my own personal favorite recipes is chocolate chia seed pudding or strawberry chia jam. Perfect for dessert or breakfast.

Yes, mashed banana is a great egg substitute. But, it’s best when used in sweeter recipes like my Vegan Banana Bread or 3 Ingredient Oatmeal Cookies.

The one drawback some have when it comes to using a banana for an egg replacement is the flavor. So, if you don’t like bananas this might not be the best option for you.

Pumpkin puree is a great egg replacement because it’s not only great as a binder, but it adds moisture and flavor.

Chickpea flour is great as both a binding and leavening agent so it’s great for recipes like cookies and biscotti.

Chickpea flour has a surprisingly similar texture and flavor to eggs and has become the secret ingredient for making delicious vegan omelets. But, my favorite recipe to make with chickpea flour by far is french toast. Amazing!

Tapioca starch is great as a binding or thickening agent for sauces. You can make cakes and even vegan mozzarella cheese with it.

You can usually find tapioca in the baking section of most grocery stores.

Nut butters like peanut, cashew, or almond butter can also be used to substitute eggs in most recipes. They’re in things like cookies and pancakes because they can affect the taste.

To replace one egg, use 3 tablespoons of nut butter.

The best place to use this combination is pancakes. You typically don’t need any other egg replacers when a combination of baking soda and vinegar or baking powder and vinegar are combined.

When you mix baking soda or baking powder with vinegar together it produces bubbles that give the recipe lift and you can make the fluffiest vegan pancakes.

If you don’t want to make your own and there are a few options you can buy that are already prepared. Bob’s Red Mill Egg Replacer and Ener-G Egg Replacer are both excellent options and they’re also gluten-free.

Black salt is not an “egg replacer” but it’s great for adding an eggy flavor to vegan dishes like tofu scrambles, avocado toast, and more. The taste is eerily close to real eggs as is the smell.

A couple of things to keep in mind: add it after cooking to preserve the taste and use it sparingly because it’s very pungent.

Check out this helpful list of vegan resources for baking, and cooking, along with a couple of recipes.

The best vegan egg substitutes for healthy vegan baking and cooking. Use these egg replacements for making cakes, muffins, and more. 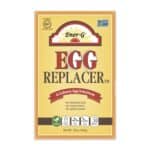 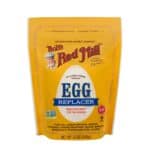 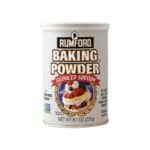 « How To Steam Broccoli: Easy, Fast, And Healthy
The Best Vegan Pumpkin Recipes »